Supporters from all 20 Premier League clubs, as well as 10 from the Championship, will unite in protests across the country 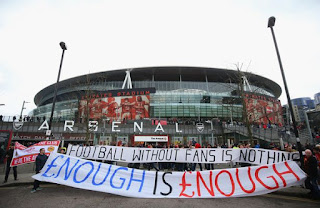 Fans from across the UK are taking action this weekend over the continued rise of ticket prices in football.

Supporters from all 20 Premier League clubs, as well as 10 from the Championship, will unite in protests up and down the country.

A recent study found ticket prices in England's top flight to be the most expensive in the world, averaging at £53.67 per game (more than double the Bundesliga average).

Premier League chief executive Richard Scudamore previously acknowledged that away fans in particular are one of the division's "unique strengths", and the Football Supporters' Federation would like to see that reflected with a £20 cap on away tickets.

FSF chief executive Kevin Miles said: “Over the past 25 years money has flowed into football enriching players, owners, executives and agents – we think it’s about time fans saw some of the benefits too.

“Nine out of 10 fans feel that football is too expensive but fans’ loyalty and commitment to their clubs is being exploited.

“The impact of rising prices has been particularly felt by away fans at Premier League level, who also have to contend with high travel costs and kick-off times changed for TV, and that’s why we’ve focussed on away fans with our “Twenty’s Plenty” campaign.

“It’s not just the Premier League where we see high prices though - every week we hear from fans unhappy at ticket costs lower down the pyramid.

“The FSF believes that prices have to come down and on the first weekend in October, fans from across the country will deliver that message – get in touch with the FSF if you’d like to join in.”