Sports committee of PFLP calls for freedom for Mahmoud Sarsak

Popular Front for the Liberation of Palestine

The sports committee of the Popular Front for the Liberation of Palestine called for a broad campaign of solidarity with Palestinian prisoner and international football player on the Palestinian team, Mahmoud Sarsak, on his 39th day of hunger strike protesting his arrest. 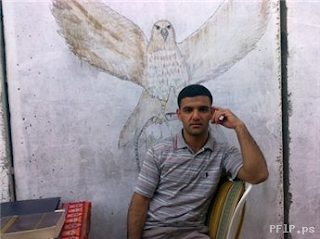 Sarsak has been held by the Zionist occupation forces since he came to the West Bank from the Gaza Strip, three years ago, to join the Palestinian soccer team. Sarsak spent his detention without trial, indictment or conviction, and has been administratively detained, labelled an “illegal combatant” since that time.

The sports committee said that Sarsak represents a national athlete and a brave symbol of Palestine, as well as the ugly practices faced by prisoners inside the occupation jails. The PFLP delegation joined a tent of solidarity in Rafah alongside Sarsak’s family and the National and Islamic Forces, praising his steadfastness and urging that his suffering must end.