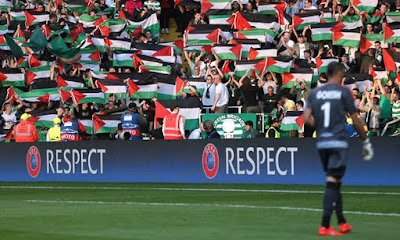 Celtic fans have raised more than £100,000 for Palestinian charities in an attempt to match an impending Uefa fine for displaying Palestinian flags at a match against an Israeli team.

European football’s governing body began disciplinary proceedings against the Glasgow club last week after a number of fans displayed the flags during their 5-2 home victory against Hapoel Be’er Sheva in a Champions League qualifier.

The return leg is due to be played in Israel on Tuesday night.

The Green Brigade group of supporters set up an appeal on the gofundme website on Sunday to match the anticipated fine, and donations passed £80,000 on Tuesday morning.

The fans are raising money for Medical Aid Palestine, which delivers health and medical care to those “worst affected by conflict, occupation and displacement”, and the Lajee Centre, a cultural and sports project for children in Aida refugee camp, in Bethlehem.

The appeal read: “At the Champions League match with Hapoel Be’er Sheva on 17 August 2016, the Green Brigade and fans throughout Celtic Park flew the flag for Palestine. This act of solidarity has earned Celtic respect and acclaim throughout the world. It has also attracted a disciplinary charge from Uefa, which deems the Palestinian flag to be an ‘illicit banner’.

“In response to this petty and politically partisan act by European football’s governing body, we are determined to make a positive contribution to the game and today launch a campaign to #matchthefineforpalestine.”

The statement said the money raised would help buy football kit and equipment to enable the refugee camp to have a team, which would be called Aida Celtic, in the Bethlehem youth league.

Celtic face their ninth Uefa punishment for supporter behaviour in five years when the case is heard on 22 September. Two years ago the club was fined more than £15,000 after a Palestinian flag was displayed at a Champions League qualifier against KR Reykjavik.

Uefa rules forbid the use of “gestures, words, objects or any other means to transmit any message that is not fit for a sports event, particularly messages that are of a political, ideological, religious, offensive or provocative nature”.

anti-zionism is not anti-semitism!
fifa and uefa = gansters and criminal zionists!
zionism = nazism
freedom for palestine!