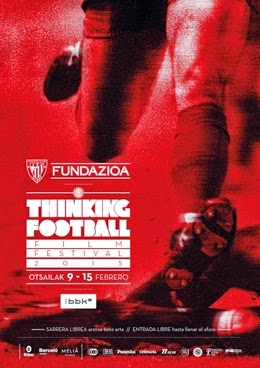 Thinking Football Film Festival is a film and football festival with a social theme organized by the Athletic Club Foundation and Sala BBK, with the collaboration of the Bilbao City council. The festival will be taking place between the 9th and 14th of February 2015 at Sala BBK, with free admission to all screenings.

The 2015 edition will be Thinking Football Film Festival’s third edition. In it, ten documentary films originating from countries such as Brazil, France, Germany, the United States, Poland or United Kingdom will be presented. These films address the social and political role of soccer players and clubs; soccer as the articulator of social inclusion, the use of soccer by political authorities, et cetera. Most of these documentaries are yet unpublished in Spain and are presented in S.O.V.

As every year, thanks to the viewers’ participation, the Audience Award to the best film, endowed with an economic prize that the director of the winning film will have to donate to a social project related to the sport, will be awarded. Previous years’ winners are the films Football Rebels (Gilles Perez and Gilles Rof, France, 2012), in the 2013 edition, and Next Goal Wins (Mike Brett and Steve Jamison, England, 2014) in 2014.