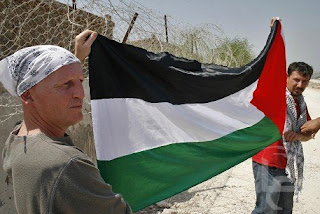 The parents of slain American activist Rachel Corrie were denied entry into the Gaza Strip Tuesday, following day-long efforts to secure their entry and cheer on teams at the Rachel Corrie Ramadan Soccer Tournament.

The Corries and a delegation accompanying them continue to wait at the Rafah border at Egypt, but have thus far been denied entry. Egyptian crossing authorities have given various reasons for the delegation's delay, despite the group having previously coordinated with Egyptian authorities, who said they informed crossings officials that the delegation had been cleared for passage.

“After weeks of coordination with the US State Department and through them to the US Embassy in Cairo and with the Egyptian Embassy in Washington and the Egyptian Foreign Ministry, I stand tonight at 7pm before the Rafah crossing,” Craig Corrie, Rachel's father said.

“I talked to my friend two miles away on the other side of this border, in a prison he cannot leave and I cannot enter. My heart goes out to him and his family and to all those in Gaza. I wish more than words can say that we could have been with them today at Unity Field for the final game of the Rachel Corrie Ramadan Soccer Tournament, we would have liked to have shared that with our friends and InshaAllah [God willing] we will be with them tomorrow."

Rachel Corrie was run over by an armored Israeli caterpillar bulldozer as she tried to protect the home of Rafah resident Samir Nasrallah from demolition on 16 March 2003. Corrie went to Gaza as part of the International Solidarity Movement, and was standing alongside six other international activists when the incident occurred.

Corrie's parents have visited the Gaza Strip three times, the first in September 2003, shortly after the death of their daughter, then again in 2006, and 2009 with a delegation organized by the US peace group CODEPINK. They keep in regular contact with the family whose home Rachel was protecting when she was killed.